I sell and style a lot of vintage costume jewelry. People love sparkly rhinestones, cool 1960s, a la MadMen style jewelry and the quality found in 1970s Monet and Napier bangles, necklaces and earrings. Its all gorgeous jewelry in my book. If you love and follow fashion you know that fashion and fashion trends are cyclical. Trends come and go. And get stale. And then nobody wants any part of it. And then, usually about 20 years later, designers dig through old fashion magazines, peruse the internet, for times gone by to find influences and influencers from a particular time. Maybe she’s a singer in a rock in roll band, (Madonna?) an it girl model muse (Kate Moss?) or a highly influential designer taking the reins of an iconic international French couture brand (Karl Lagerfeld for Chanel?). I think you know where I’m going here. I’ll just say it. The late 80s and early 1990s are back. Check out this iconic cover from Anna Wintors first issue of Vogue as Editor In Chief from 1988. The photographer was Peter Lindberg.

Here are a few posts from Vogue’s website I saw in recent weeks:

The 25 Most Influential Runway Shows From The 1990s. Here are just a few that I especially liked: 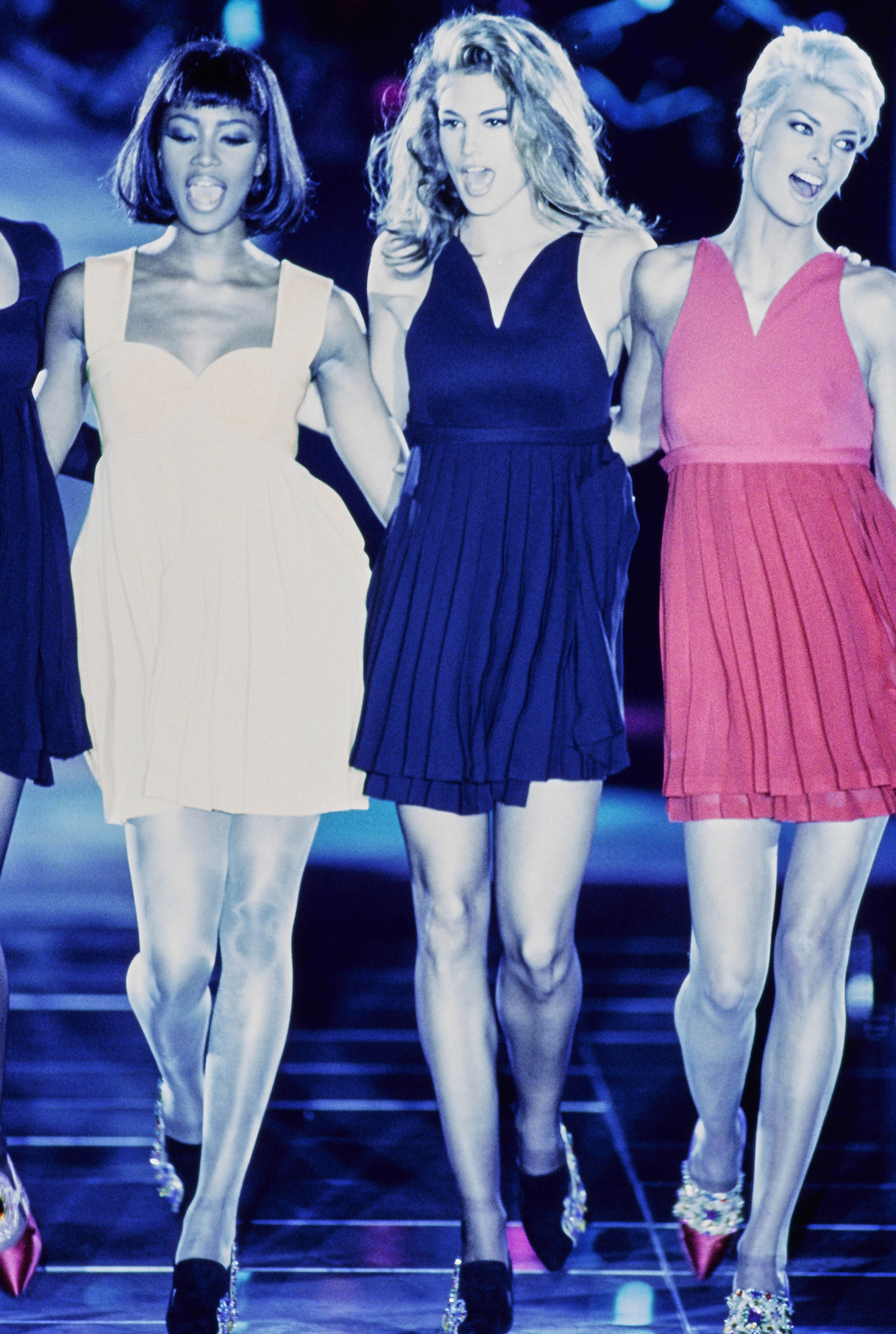 Gianni Versace Fall 1991. Look for all the top models from that era including Claudia Schiffer, Cindy Crawford, Naomi Campbell, Linda Evangelista and Christy Turlington modeling in this show.

Gucci Fall 1995 by Tom Ford. I remember Madonna wearing an outfit from this collection to some awards show. It was a hot collection then and I still swoon over the cool velvet trousers and satin shirts. I had a knock off pair of the round toe pumps in deep burgundy patent leather with the signature horse bit. 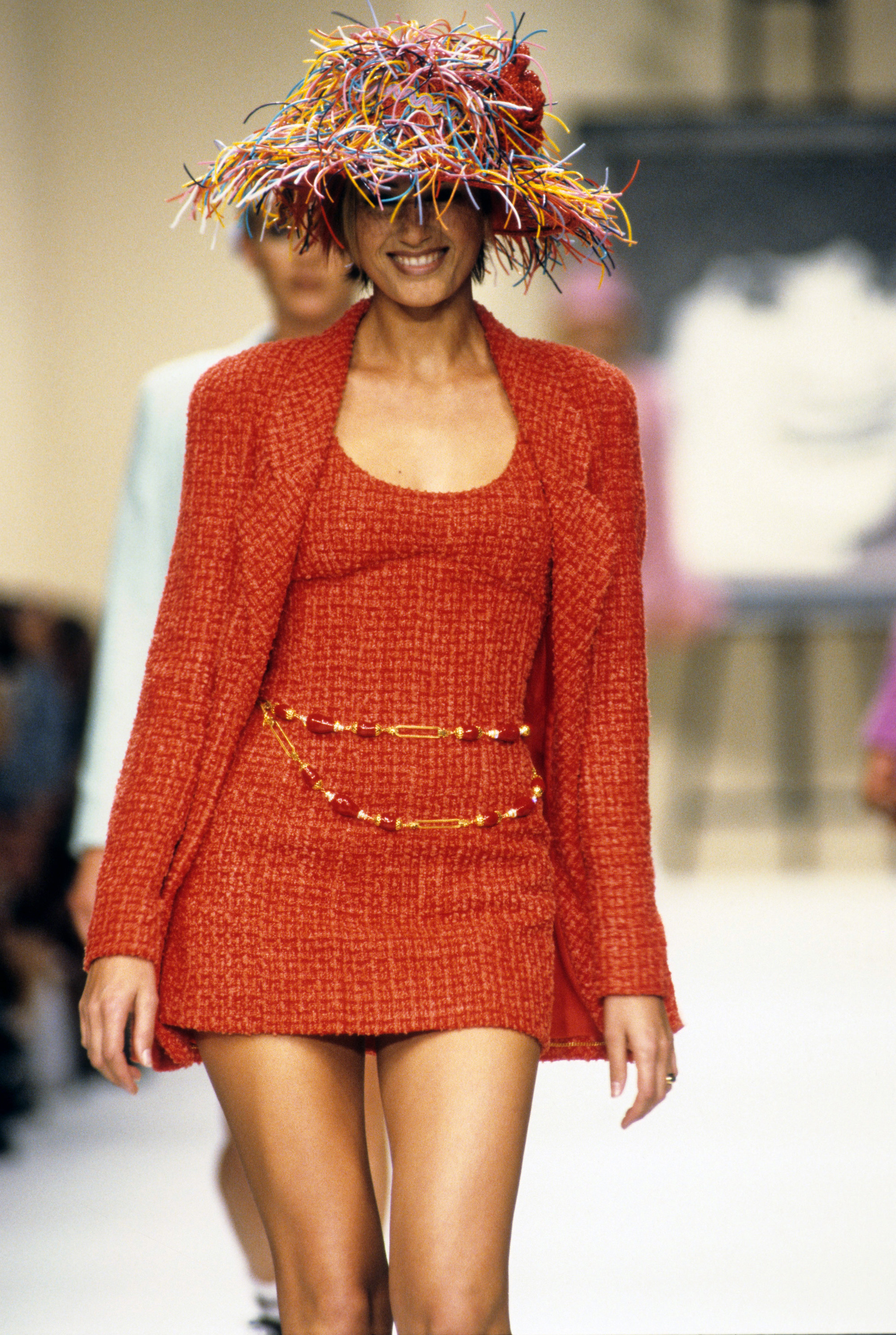 Chanel Spring 1994 by Karl Lagerfeld. Wow. Chanel was young and hip and yet true to the Chanel DNA. The gorgeous and youthful tweed suits, and all the colors! Yum! 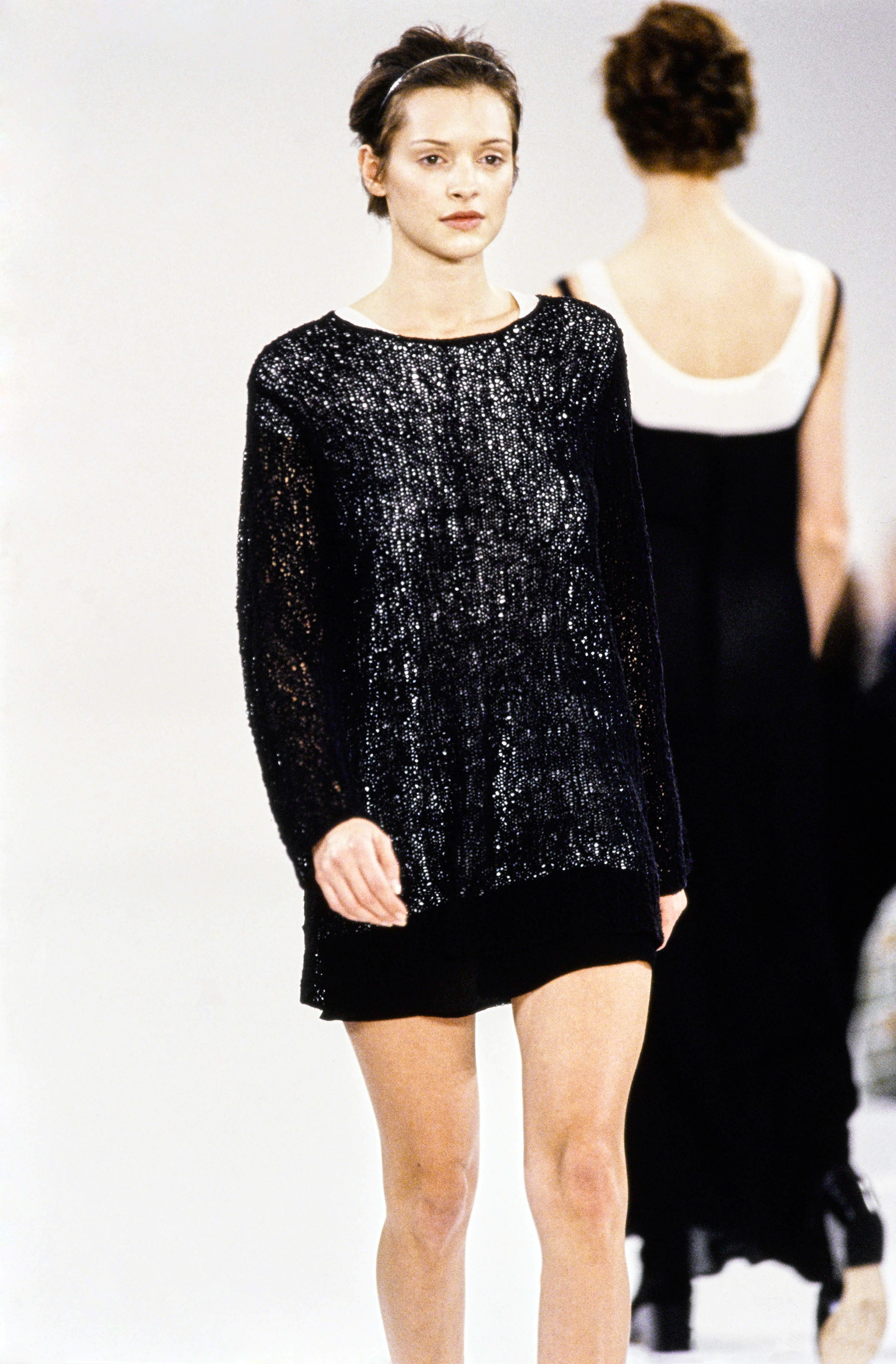 Calvin Klein Spring 1994. This collection was about as simple and as far away from the 1980s dress for success as you could get. Pure and simple. Kate Moss was Calvin Kleins muse. Remember the racy ads with the 1970s wood paneled walls?

Gucci Fall 1996 by Tom Ford. Another amazing collection by Tom Ford. He was spot on in hitting the right looks at the right time. Paying homage to Halston and Elsa Peretti in the finale with white jersey dresses and geometric metal and fabric cut outs, Vogue declared this collection “a fashion equivalent of a one night stand at studio 54”!

Gianni Verasace Fall 1992. I remember this collection and it still looks great. It was called “Miss S&M”. It caused a stir. Women loved it and loved wearing it out on the red carpet. Even with the cheeky title it was well done and pushed the boundaries of how much skin could be exposed.

See the complete list and  article over on Vogue here. 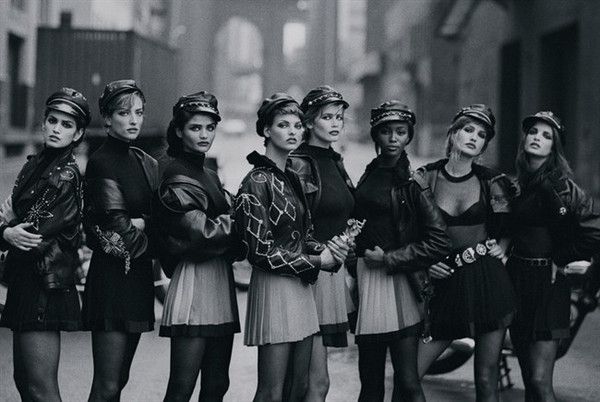 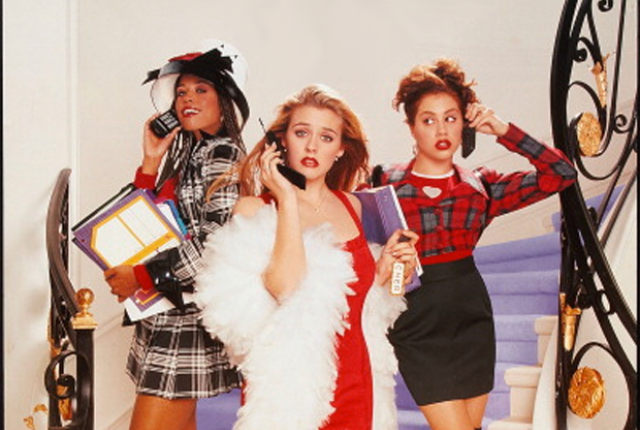 Clueless. The movie. I keep seeing and reading references to this movie. If you are a fashion lover, you must see this film. The costuming is a bit over the top, but hey, its a movie. Alicia Silverstone is adorable in the lead role and it has a major cult following. I love the feminine, plaid suits and her cute wardrobe. It’s dated and yet fresh at the same time. Rent it and watch the extra features to get the scoop on this film. It definitely captures the 1990s. Another film from the 1990s that has reached cult status is Romy and Michelle’s High School Reunion (below).

536,000. The number of results on Google when you search for 1990s themed party. Even I am astounded by this number! Hey, the music was good, hip hop and alternative rock became mainstream and shows like In Living Color, Frazier, Friends and Seinfeld ruled the television networks. What about the show Beverly Hills 90210 and the spinoff Melrose Place? I definitely got a lot of fashion inspiration from these shows!

The deep, red lipstick so popular in the early 1990s is back. I remember seeing Sandra Bernhardt on a late night show being interviewed and she was talking about her nail polish. It was a deep, dark, red. She said it was called Vamp by Chanel. I just saw somewhere in the last week, that one of the hot new lipstick colors is a deep, dark red and reminiscent of 90s.

Stazia Loren Jewelry Collection. (above) Based in New York, Stazia specializes is couture vintage designer jewelry. I found her collection in Barneys Beverly Hills and most of the pieces were from the 1990s. I have been sourcing vintage jewelry for 13 years and I always bought fabulous 1980s and 1990s jewelry because, first of all I liked it and I knew that some day, it would be back in style. Once I saw Stazia’s pieces displayed at Barneys I realized that the 1990s jewelry was back and it looked good. Now, like I said Barney’s focus with her jewelry was on the 1990s but she sells exquisite pieces from the 1920 to the 1990s. You can learn more about Stazia Loren here. Prepare to drool. And if Barney’s is into it, you can be pretty sure this trend is on the come. 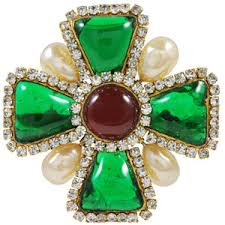 1990s jewelry. In the 1990s all the high end couture houses produced costume jewelry. I remember spinning counter top jewelry display cases. I remember Givenchy, Christian Dior and Karl Lagerfeld. I bought about 8 pieces of Karl Lagerfeld jewelry when Emporium Capwell closed in San Francisco. I still have most of them. Jewelry from this era is big, over sized, colorful, gleaming in brushed/matte or shiny gold. Griopoix glass (a colored glass technique that was invented in France – see the Maltese cross brooch left) was very popular as were pearls, chains and charms. Embellishments in jewelry were grand.  I have been lucky to find a few pieces of these now coveted costume jewelry brands. Jewelry from the 1980s to the 1990s was well made and European designers often had pieces made in Italy or Germany. Many of these pieces are heavily gold plated and depending on the brand and quality are highly collectible. If these designer brands are not in your budget, but you want to bring in some of this 80s/90s jewelry into your wardrobe not to worry because fortunately there were many American companies that were making excellent quality costume jewelry too. Brands like Monet, Napier, St. John and Liz Claiborne designed and manufactured fabulous jewelry that was absolutely on trend and has also held up well if properly cared for.

Prices will vary but all of these brands made really nice jewelry that reflected the popular colors, embellishments and motifs of the times.

To summarize. 1980s and 90s jewelry is back. And it looks goooood! Think about costume jewelry this way: it really is art. Designers select materials, stones and colors to represent and appeal to women of that particular time. And jewelry from this era is really spectacular.

Want to check out my 1980s and 90s costume jewelry in the store? Click here to shop the Rodeo Drive collection.